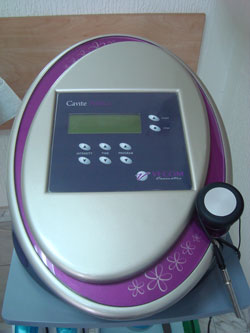 Treatment performed with the device known as CAVIT PERFECT is considered as a non-invasive method of application of the cavitational effect on a tissue. Ultrasound waves are directed at a certain depth in the tissue. That enables selective breaking up of the fat cells, while the skin, blood vessels, nerves and muscles remain healthy. Ultrasound creates bubbles in tissue. Due to decompression, those bubbles become larger and eventually explode while the fat cells break up. After their breaking up, fat cells go as triglycerides to the intercellular space where they split up into glycerol and higher fatty acids due to enzymatic activity. By metabolical processes, the newly formed substances go to the liver where all that fat is decomposed the same way as the food we consume.
AFTER ONLY A SINGLE TREATMENT THE RANGE OF A TREATED PART IS DECREASED FOR SEVERAL CENTIMETERS.